We are 9 years in business this month and never paid too much attention to Google Reviews before it came to our attention a few weeks back that we had received our first ever one. Unfortunately it proved to be less than flattering to say the least even though we have never had any dealing with the person in question. 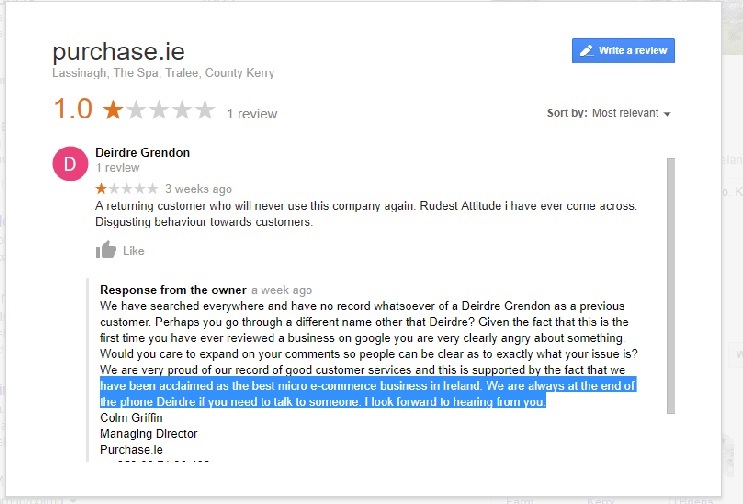 We replied asking for more information and when we heard nothing back we tried reporting the matter to Google which is an ordeal to say the very least.

Through the my business section of google we eventually got chat support and then a phone call. I explained that we have never had dealing with a person of this name and that we had replied over a week ago looking for further clarity on what the issue was but got no reply. I fully expect the person on the other end of the phone to say fair enough we will delete it.

He repeatedly insisted  “this is an experience a customer of yours had it cannot be deleted”.

I asked the rep to provide evidence that this person was in fact a customer but they were not able to do this.

I then asked for contact information for the person that left the review and the rep refused to provide this.

So that is google reviews for you….

If you have had dealing with us we would greatly appreciate if you took a minute to let google know of your experiences be they negative or positive.

Please click here to have your say on Google Reviews about Purchase.ie

Just make sure they are real!