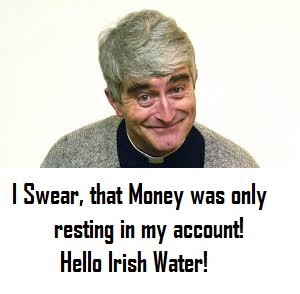 “It was only resting in my account” is one of the phrases the late Dermot Morgan became famous for in the hit 1990s sitcom Fr Ted. Your money will soon be resting in the account of Irish Water!

Today (November 19th) Minister Alan Kelly addressed the Dail as the Irish government bowed to the pressure of the general public and declared a massive climb down on water charge rates announced by the Commission for Energy Regulation back in September and have pretty much eliminated any incentive for any home to conserve water.

The key announcement today are as follows

– One adult households will pay a maximum of €160 per annum for water.

– All other households will pay a maximum of €260 per annum.

-If you got a septic tank or a private well you will only pay 50% the above two rates.

– The 30,000 litre allowance per home has been abandoned.

Despite the climb down there is an inclusion of a €100 water conservation grant. All households that register for the water charges are entitled this grant but it will take many months for you to receive this grant. It will be paid at an unconfirmed date by cheque or bank transfer but long after you have made payments to Irish Water.

So the money you pay them will be resting in the account of Irish Water? Why add this unnecessary administrative process to the already complex matter of water charges? What will the added administration costs to carry out this process cost the taxpayer?

Minister Kelly claims that the majority of homes will beat the capped water charge and pay less if they can conserve between 10 and 15%. Our figures would not be in line with what the minister is saying.

The whole concept behind introducing water charges was meant to be about encouraging people to conserve water. It now seems that has gone out the window. It is all about extracting more money from your pocket and nothing more.

What’s more it doesn’t matter if you are unemployed, on average industrial wage with a 25 year mortgage on a property in negative equity due to the banking collaspe or you earn €200,000 a year. Everybody will pay the same.

The fact that €260 is 1% of an annual household income as opposed to 0.01% clearly means nothing to this government.

We have been doing detailed breakdowns on the likely costs of water per household since the initial charges were announced before the Local and European elections back in May. We look at water usage per home under the following heading

Below is a summary chart on water charges and how figures have changed since the initial announcement before the May Local and European elections.

To get a further breakdown on what water usage we estimate households use click on the links at the bottom of chart.

~ All homes are entitled to a €100 water conservation grant rebate.

How Water Usage Figures are Estimated

Eight Reasons to Pay Irish Water As little as possible

We have moved to Kerry, are celebrating 5 years in business and want to give you discounts.